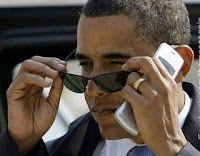 My thoughts and prayers, like that of many Americans, go out to the victims of yesterday's bombings in Boston.  If any good comes of this, it will be to remind all of us of the need for constant vigilance.

President Obama likes to project a cool image, an illusion of being above the fray to which we mere mortals are subject. For me, however, the cool act is wearing very thin.

There are circumstances in which it is wholly appropriate to feel, and show, anger and outrage.  Yesterday was one such instance, but there was the president making pronouncements in his usual robotic manner.  Where is your anger, Mr. President?  Why aren't you totally outraged that terrorists would make such a bold attack on a major American city?  Instead, we get the usual cliches that he speaks after every untoward event:  "let me be clear", "make no mistake", etc., etc., etc.

I suspect that Mr. Obama doesn't show these emotions because he doesn't actually experience them as most normal people would. He can appear above the fray because on an emotional level, he is above the fray, lacking the empathy needed to put one's self in another's shoes. He is detached from these horrible events, as if he were watching a fictitious movie. The only time I can recall seeing him show a flicker of genuine anger is when a reporter asks him a tough question (and that doesn't happen very often).

I want my president to be angry about these attacks on America and to show that anger.  I want to see the emotions that most Americans are feeling now reflected in the president.  What I see is Mr. Cool, but I have to wonder:  is Obama really cool, or just cold-hearted?
Posted by Carol M at 8:53 AM No comments:

Brazenness Comes out of the Closet

Those who adhere to a progressive ideology have long been at work surreptitiously in this country, subtly indoctrinating our children in the public schools, systematically removing prayer and, indeed, any mention of God in the public arena and undermining the strength of the family unit.

Subtlety has been replaced by a brazen, in-your-face effort to undermine the rights of parents to raise their children as they see fit.  In their infinite arrogance, these leftist radicals believe that not only do they know what's best for everyone, but that they are also morally superior to those who disagree with them.

In 2008, the Romeike family fled Germany under threat of arrest because they were home-schooling their five children, which is illegal in Germany.  The United States granted them political asylum and they have lived here since.
Now, Eric Holder's Department of Justice is threatening to deport them, saying that home-schooling is not a "right" of parents. No doubt Eric Holder agrees with the bullying attitude of the German government on this matter.

The icing on the cake is the pronouncement by MSNBC anchor Melissa Harris-Perry that children don't belong to their parents - they belong to the entire community. Really?! If a child needs orthodontia or surgery, will Ms. Harris-Perry help pay for it? Children are part of a community, just as their parents are, but the responsibility for raising those children and instilling values lies with the parents, not the community as a whole.  This is just an attempt to undermine parental authority and, unfortunately, there are too many parents today who are willing to have the government be a surrogate parent to their children.

Where will this end? We who believe in and want to preserve the traditional values and practices which made this country great and which comprise its foundation must be as aggressive in our efforts as the leftists. In other words, it's time to take off the gloves.
Posted by Carol M at 4:00 PM No comments:

Carol M
I live in Richmond, Texas with my husband, John and our dogs Dusty and Doc.